I’m not entirely convinced March is really over – it went by far too fast. We finally had some nice weather, I got my hair cut, my button shoes arrived (after the drawing above) and it was my birthday – yay! And then it snowed again, in the rubbish way.

Treasures of Sky Mall by Gemma Correll
Anyone who’s ever spent time happily ridiculing catalogues like Sky Mall and Innovations will love this – some of the funniest/stupidest products as drawn in Gemma’s own style. Of course she goes mostly for the pet related items which makes things even funnier with her trademark cats and dogs looking slightly bemused by the madness. Get your own copy off Etsy.

Slow Boats to China by Gavin Young
I just can’t visit the Oxfam bookshop without coming away with a bunch of old travel books. This one, written by a one time war correspondent for The Observer is the tale of Young’s attempt to travel from Greece to China only by boat. This took place in 1979 when he discovers he is almost too late, passenger shipping having been almost completely killed off by air travel. Indeed, if it wasn’t for his Observer connections and general public school English gentleman background, he wouldn’t even have got half way. Lucky for him, the entire old boy network of the ex-British Empire mostly find him ships, from a board bunk in a tiny local trader to the owner’s cabin in a huge container carrier. For the most part, it’s pretty exciting (and often dangerous) stuff and I often had to stop so I could go read up more about various areas he passed through. Overall, it gets a bit depressing, knowing this sort of thing is completely out of bounds to your average traveller. I’m about to pick up the sequel, Slow Boats Home.

Mountaineering Holiday by JS Smythe
My other Oxfam purchase – this one from 1939, just days before WW2 broke out. It describes a, well, mountaineering holiday in the French/Italian Alps and is yet another addition to my collection of books that would never be published these days – involving mostly rambling monologues by over-privileged English Gentlemen. At least Gavin Young was a journalist. Anyway, Mr Smythe climbs various mountains and describes them pleasantly with breaks to pontificate on the horrors of motor cars, war, tourists, foreigners, people who climb too slowly, people who walk too fast and women in breeches. I especially enjoyed the parts where he describes other less experienced climbers they encounter and basically says, well, they’re going to die if the weather changes. Nice. Might look him up and see if someone eventually pushed him into a crevasse. Oh! it does also contain an anecdote about a man caught smuggling drugs through customs under his top hat. You don’t get that kind of thing these days.

Wonders of the Solar System
My Twitter friends have been debating the general hotness of Prof. Brian Cox without bothering to mention that he’s presenting a TV show about the Solar System! Priorities, people! I love the solar system, having been one of those kids who wants to be an astronaut. I have a telescope and everything. Anyway, having quickly caught up on iPlayer, this is awesome. He gets to travel all over the world to weird and wonderful places that help explain some of the amazing details of our solar system. I admit I’ve been out of touch with current developments so I’ve been utterly delighted to see the all the discoveries made recently. I’m now firmly subscribed to the Solar System Exploration blog. Hurray. Saturn is still my favourite btw – it’s totally got the best moons.

Professor Layton and the Curious Village
My sister lent me this and I played it for two days before tossing it aside in a rage. While the concept (discover the truth about incidents in the village by solving puzzles) is all well and good, in reality it’s like being stuck in Hyrule Town for an eternity trying to find that one person who will give you the whatever so you can move on to the next stage. Having to look for the cat all over town nearly broke me and then I had to go and look for something else. Aargh. Even worse, I am rubbish at riddles and so a third of the puzzles just made me feel stupid, which isn’t particularly enjoyable. I also hated how the first ‘tip’ was just the original question reworded, if that. I’ll stick to Picross, thanks.

IMDB (Free!)
I think the iPhone is especially amazing when I’ve turned off the laptop and gone to bed and then come across something in a book that I have to look up NOW. Normally, I would plan to do it the next day and then immediately forget, or be awake for ages, thinking about it. Now I can just fire up the iPhone and check. This app for the Internet Movie Database is perfect for those moments when you finish a great book and discover they made a film of it too. You can do all the usual IMDB searches and even check if it’s available to buy on Amazon or, more usually in my case, if it’s too obscure/ancient to have had a DVD release yet – boo.

– Lots and lots of new designs now available on Spoonflower.
– My Spring Cleaning Clear Out is going excellently, except now instead of a big mess I have piles of bags of stuff to BookMooch, eBay, give to charity etc. If anyone wants to give me a lift to a charity shop I would be most grateful. The only one we have locally is pretty much right next door and I’m not sure I want my ex-belongings quite that close by.

– Chickengirl Design – cute illustration by Jannie Ho, and she’s off to Japan soon too!

Things to look forward to in April

– Catching up with Stu and Catherine, both visiting this month.
– Maybe finally getting Japan trip booked

Much quieter month in general, though sales on Folksy were up again. The crazy world of sales. 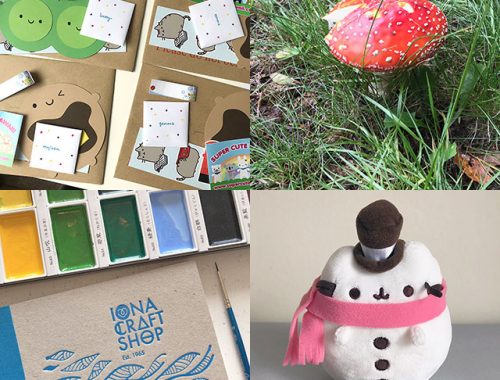 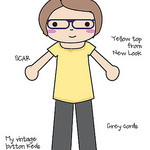 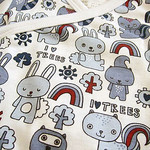