What were you doing 10 years ago? asks Alice. It’s a great question and one I had to really think about (while walking to the delivery office to fetch a package). I certainly wasn’t in India, sadly.

Obviously, from all my recent babblings, it was the year I started diskant. It looked a bit like this: 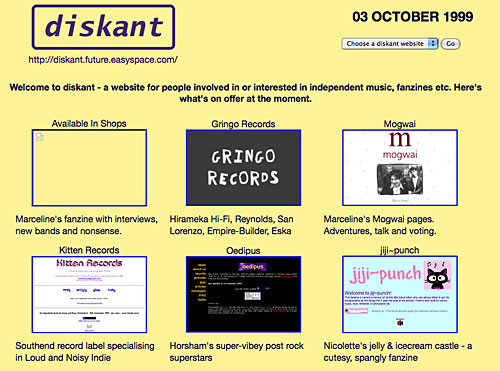 That’s the earliest version still in the internet archive. Compare it with the current site. Hilarious. Literally no-one had the internet those days – I used to edit the pages offline, save them to a FLOPPY DISK and take them to my friends or my work to upload them. You can see all my old-skool internet pals there who I am still good friends with: Kitten Records run by the one and only Greg Kitten, Gringo Records and The Oedipus, now in Blood Red Shoes and I’m Being Good.

Not only did I not have the internet for most of 1998 but I didn’t even have a camera! So there is virtually nothing I can show you. Luckily I do have a sketchbook from that time.

The drawing on the left was my first attempt at Microsoft Paint and eventually became the image in this blog banner!

In 1998, I was 23 and living in Aberdeen with my sister Nicolette. I was two years out of art school and splitting my time between travelling around the UK on my young person’s railcard and working at a charity that recycled computers. While I was there, I did a course on Photoshop, taught myself how to how to design websites with the help of my manager’s collection of .net magazine and then got made redundant when they ran out of money.

The other half of my life was much more fun – I spent a lot of time in Manchester and Edinburgh hanging out with various people and going to see bands. We were all obsessed with Mogwai, Tortoise and Pavement and I had friends all over the country who all wrote zines so we would swap zines and write letters and make mixtapes.

I spent a lot of time on trains, as you can see here. I still have a great love of train tracks, bridges and telegraph lines. I listened to Mogwai Young Team so many times on these journeys that it still brings me straight back to the Tay Bridge or the Lake District whenever I hear it.

I saw Mogwai 3 times that year and interviewed them in Manchester, still one of the funniest interviews I have ever done.

m: Can you speak any Gaelic…?
stuart: No, my mum speaks it fluently.
m: …apart from ‘Telefios’? (Scottish news programme entirely in Gaelic)
stuart: ‘Padraig Post’ (’Postman Pat’ dubbed in Gaelic’) is about as far as my Gaelic goes.
m: You get ‘Rugrats’ in Gaelic now.
dominic: ‘Donny Murdo’ as well. Like, see, ‘Dangermouse’ is called ‘Donny Murdo’ in Gaelic and that’s just his name because..eh, Dangermouse in Gaelic isn’t DM so they had to change his name to Donny Murdo.
stuart: (over-excitedly) Can I get a banana Dominic, can I get a baNAna?!
voice: There isn’t a word for ‘danger’ in Gaelic.
stuart: That’s ‘cos it’s really nice up in the highlands. There’s nothing dangerous apart from…sharp-toothed fish.

Eventually, after much begging, Mogwai organised a gig in Aberdeen and brought The Yummy Fur as support, just for me! Sadly the gig was a total disaster and Mogwai still vow they will never return there. Sorry, Aberdeen! I had a great time though – I took them all record shopping and The Yummy Fur adopted me as their sixth member for the evening so I could get some free dinner. Since Alex Kapranos was in the band then, I have technically been in a band with him.

I dug out a photo of me from around this time and, funnily enough, it’s the only other year I considered growing my hair long. I am doing this right now, mostly because I can’t afford to go to my fancy hairdresser any more and I don’t trust anyone else, and it looks pretty much exactly the same. 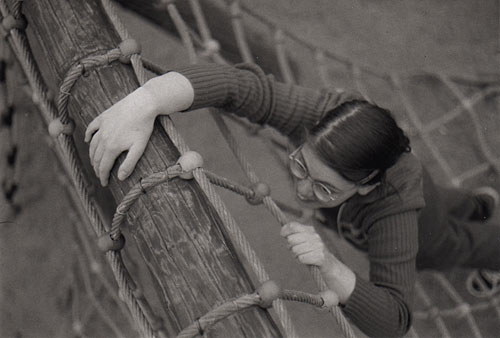 No, I have no idea what we were doing in these photos. There are a whole bunch of these taken at Aberdeen beach. Black and white, as well. I guess we had some kind of arty plans for them. God, I would kill to have those trainers back. I loved them.

So, what were YOU doing? 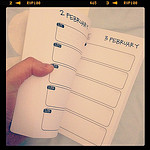 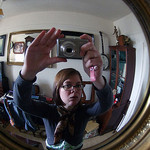