Since I got back from Japan it has been FREEZING. Last night it was -10 degrees! At least we do have lots of snow to make up for it. My outfit above is a bit of cheat – I don’t really wear my hat or boots around the house, or go out without a coat – but it would be boring to draw the same stuff again, so think of this as me about to put on my big huge warm fleece and panda mittens and go outside. Also a bit of a cop-out on the rainboots but they are too slim fitting for most of my trousers. Shall attempt to start wearing tights again, just for this.

Inception
My favourite part of long-haul flights is getting to watch all the films I didn’t want to spend £10 going to see. I also saw Toy Story (awesome but I think I missed half the dialogue – the headphones were so rubbish) and Salt (really stupid, like more stupid than 24, but entertainingly stupid when you’re stuck in a plane). Anyway, everyone was going on about Inception when it came out but most of my trusted friends seemed unimpressed so I didn’t make any efforts to see it. And it was really cool and kind of awesome but also quite boring. I think mainly because I really did not care at all about his dead wife and his kids and blah blah blah.

Rinco’s Restaurant
This however, was a gem. A Japanese film about a girl called Rinco who loses her voice and starts a restaurant in her mum’s shed. All the meals she makes change peoples’ lives for the better. That could of course be terrible (the trailer is not entirely awesome) but it’s all very Japanese and charming and very twee. It also has some great stop-motion animation and songs and a flying pig. Do see it if you get the chance!

Picross 3D (Nintendo DS)
I love the original Picross in a rather pathetic manner, replaying it at least 3 times now. It’s basically a puzzle game, a bit like a cross between Sudoku and Minesweeper. Anyway, I bought the new game for the plane and it’s very addictive. Instead of working on a flat grid, you now knock away cubes to reveal an object. I say object as if these are in any way recognisable – even once they colour it in and go ta-da! I’m usually going oh, yes, it’s um… OH ‘man looking through window’, of course. Still fun though. I do however, have one very big problem with this game, which is that they’ve tried to fun it up by having a…a…one-eyed cubeduckchickalien (srsly, WHAT IS THIS?!) around at all times being weird and wrong. The sarcastic way it double-takes when I complete a level makes me want to punch the screen.

Apollo 13 by Jim Lovell
I am, as many people know, a space nerd. And despite already knowing what happened on the Apollo 13 mission, and having seen the film, I was still totally caught up in the story. Even while being in Japan. In retrospect, maybe space disasters are not a subject you want to be reading about on a long-haul flight. My only real disappointment was discovering on my return via Google that there aren’t any real crackpot conspiracy theories that it was faked. The moon landing conspiracy theorists are some of my favourite nutjobs.

Persuasion by Jane Austen
Despite the slightness of this book, it seems to have taken me weeks and weeks to finish it. I blame jetlag which generally made me fall asleep after half a chapter. The shortness is definitely a positive though – there was rarely a dull moment. That’s me done reading all my Jane Austens now but I may well look out for the others.

Tinker, Tailor, Soldier, Spy
I heard they were remaking this so I thought I better watch the classic original while I still can.I made the mistake of watching the first episode before I went to Japan and had thus forgotten everything when I returned. So, while it was gripping and I really enjoyed it, I was also a bit distracted wondering if I was supposed to know what was going on, or if not knowing was the whole point. Maybe I should read the book. The remake looks like it might actually be quite good but probably at the expense of having lengthy scenes involving nothing but old men smoking in front of dingy 70s wallpaper. Which would be sad.

Tappi Bear (Free!)
Lots of cute games involving cute bears and donuts. They’re not all awesome but the ones that are are great fun. I especially love the spooky wooky Zoo Keeper style game and the one where you have to punch out bears who are trying to steal your donuts. Also, it’s FREE.

– “Organise trip to Japan and have an amazing time!” Done!

– Jenna in Japan – great blog about living in Japan, plus where I first heard about Melon Fanta. Sigh.
– Linocutboy’s World – really making me want to do some more printmaking

Things to look forward to in December

– The Yummy Fur reunion show. I could write a book (or at least a zine) about all the times I’ve missed seeing the Yummy Fur by ridiculous circumstance. Please not this time!
– Being able to start on next year’s exciting projects – I’ve banned myself until December 26th.

Been a bit nuts since I got back from Japan with online orders, SCK orders and wholesale stuff. Nice to be busy! I also updated October’s numbers since I was in Japan. 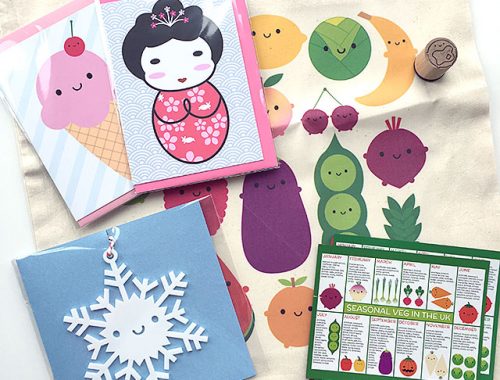 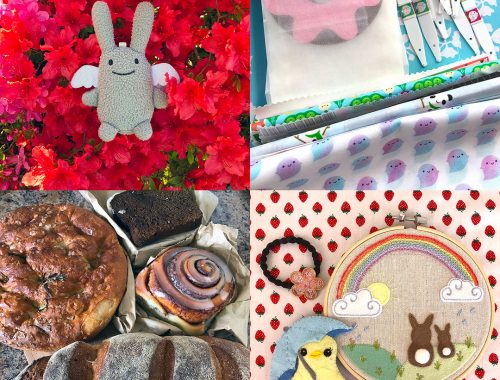