A-Z in the Life My Day in the Life post didn’t go quite as planned. I started off fine and then it all went awry around tea time when I got a bit of a headache. So instead I have done it A-Z style. I also took no photos so here’s a picture of me standing beside a small tree in Rothesay – see R.

ADOBE FORUMS – Finally bothered to look up why Photoshop greys out all the menus sometimes. Seems it’s because I work on large files on a laptop. Huh.

BUCHANAN STREET – where I discovered they are currently building a flagship Paperchase store (hooray!)

COVERT AFFAIRS – if anyone could explain why I am still watching this, I would be interested to know. Oh wait, it’s the vain hope that they might let the blind techie guy go on rogue ops again.

DIVERSIONS – Now I remember why I don’t go out on Sundays. Always a good feeling when you look up from your iPhone and discover you’re the only person left on the bus and it’s gone wandering off around the St Enoch Centre.

EMAILS – I think I replied to approximately 500 emails from Claire today.

FIRSTBUS – actually not the bane of my life for once, Sunday diversions aside.

GLARE – After my Fog holiday, my eyes were unprepared for the glaring sun in the evening while waiting for the bus stop. I had a bath later and the new bulb was so bright I ended up with a double headache.

HOUR, THE – I started watching this on the iPlayer. It’s pretty watchable so far.

INTERNATIONAL SIGNED FOR – It seems my parcel of stock for a new bookshop in Prague has gone AWOL. At least I should get compensation. Looks like it’s Airsure or nothing from now on. Shame as I’ve only lost about 5 parcels in 4 years.

JAPANESE CURRY – Made on Saturday, reheated for my dinner with some noodles.

KRISPY KREME – For some reason, I am reading Katie Puckrick’s autobiography and she won’t stop going on about Krispy Kreme and now I really want some, and wish Glasgow wasn’t so backward when it comes to things like donuts and onigiri.

LULU – I came across a Lulu offer email I saved and realised it ended today. Panicked a bit as I need another test copy of my secret surprise, but managed to hastily finish editing the file and order a new copy.

MONSTER MUNCH – I scored a 6 pack of pickled onion Monster Munch in Sainsbury’s, which had been reduced for no discernable reason. Woo!

NEW PRODUCTS – I started pricing up some of the great product plans we came up with in Rothesay. I should give these a code name so you can see how long it takes for me to get a product from planning to sale.

ORANGE – I had planned to visit the Orange shop and see about getting a new iPhone but I timed it terribly. No time before the film and they were shut after. Oh well.

PUBLIC DOMAIN  – My favourite site to visit at the moment is this Tumblr that posts random stuff in the public domain. Go see!

ROTHESAY – Claire posted up her photos from our trip including some of the ace signage and me standing beside a small tree.

SUPER 8 – the event of the day as I went on one of my infrequent trips to the cinema. I think I only go for Ghibli, JJ Abrams and adaptations of favourite childhood books. I enjoyed Super 8 a lot – the ending was a bit silly but one comes to expect that from JJ Abrams. The whole train crash section was worth the entire movie though – it was hilariously awesome.

TAKE THAT – For some reason Cineworld forced us to watch an entire Take That music video after the trailers – a monotonous bore of a song tied in with clips from a horrifyingly terrible-looking 3 Musketeers film. I never had anything against Take That previously but now I would like to kill them all. I would have paid more money for them not to show that.

UMBRELLA – Didn’t go with my finely-tuned weather instincts and brought my umbrella along. Not only did I not need it, as it only rained for 3 minutes, but I had to take my coat off by the time I got into town. Would have been better bringing my sunglasses.

VULPIX – My Pokemon team has been sadly lacking a Fire Pokemon and I had almost given up on my Vulpix – despite being a fire Pokemon it had no fire attacks yet. Finally today, I levelled it up enough that it learned Flamethrower, plus I taught her Dig so now I actually have a Pokemon that can defeat Electric and Grass Pokemon. Are you asleep yet?

WALKING – Since Pokemon comes with a pokeball-shaped pedometer I can tell you I walked 6640 steps today.

X – Normally, I am pretty good at coming up with something for X but not this time. Instead, why not enjoy the X page from Deth P Sun’s upcoming alphabet zine. I need to buy an actual X-acto brand knife as a failsafe for future A-Zs. Or a Xerox machine.

YAWN – I expected to do a lot more work today but I ended up feeling really sleepy and went to bed early. Oh well.

ZOMBIES – The little zombie film the kids were making in Super 8 is shown over the credits and was brilliant. Better than the last third of the actual movie really.

The End. Make sure you check out Frayed At The Edges for Julie’s round-up of everyone who joined in. 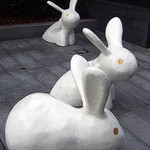 Doodle Day in the Life 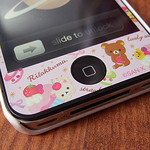