Boring outfit again. I have bought some new clothes but it’s still too warm for winter clothes since the shops all have their heating up too high. I had a cardigan on one day in town and thought I was going to die from heat exhaustion. That isn’t stopping me from wearing my pompom hat at any opportunity though.

What I did in October

A lot – I did blog 19 times. Started a global sales map and Facebook page. Added a bunch of new stockists. Made the Arecibo message in perler beads. Finished the new Miso Funky website. Looked at the Moon a lot. Went to Renegade London and Legoland. Announced my new Cookie Cute range of products, and my 5 year diary. Made some ghosts and had a spooky giveaway. Ordered lots of cool stuff from Moo. Designed quite a few custom address labels. Made it to fourth place in the Spoonflower ornament contest. Added new stuff to Zazzle. Had another murder in the area. Busy month!

An iPhone 4s (yay!), plus a Rilakkuma screen protector and a Cakeify case (the latter still to arrive). A dress with little birds on it. A few secondhand books and a couple of zines. And all I bought in London was a little bear bowl, a Lego minifig of myself and a kawaii Christmas pudding ornament from Paperchase. I fear I’ve become too successful at not buying things.

Really need to make an effort to finish some of the books on my pile. Instead I’ve been re-reading old books so I can discover they’re not as good as I remembered and donate them.

Well, they did an amazing job. Of cutting out everything I liked about these stories and replacing them with crazy action stunts and 3D nonsense. So disappointing. I try to be understanding about adaptations but I hate this trend of rewriting perfectly exciting storylines to make them more ACTION-PACKED and to stuff in some pop culture references and Hollywood twaddle about believing in yourself. See also the Narnia movies. I found the ending totally baffling – did they really undo a clever twist about the treasure not being buried at sea but actually at home, and instead set up a sequel where they go on an adventure to find the treasure? Well done everyone. Other than that, and my constant confusion at wondering how they were going to fit all of the 3rd book in the next 20 minutes, it was an enjoyable film for kids though the animation was so realistic as to be distracting. I’m off to add the original animations to my Lovefilm list.

The Tim Burton version. Everyone hated this so I was surprised that I really enjoyed it. Hardcore Alice fans probably had a me watching Tintin experience and it was totally stupid making a sequel that is basically the same story but it kept me entertained and the effects were really well done. Would watch again.

I am so glad to have a new iPhone that actually opens apps and lets them work at a usable speed. I haven’t gone too crazy with new apps yet ‘cos it’s still exciting being able to use to old ones properly, but I do like Instagram a lot.Basically like a cross between Flickr and Hipstamatic, you can post photos from your phone and give them various effects. A lot of my favourite creative friends are on it, and ‘cos people can only post 1 photo at a time, I rarely get overwhelmed by new updates. 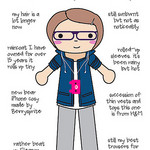