For my first conversation, I picked Emma, who I think I first met at my Zine Workshop, where she made some Japan-related mini zines that later turned into a full zine, Things I Love About Japan. She was recently in Kyoto so I thought it would be fun to start with someone who’s been to Japan recently, and also whose trip was very different to my own. You can read more about her Kyoto trip here. 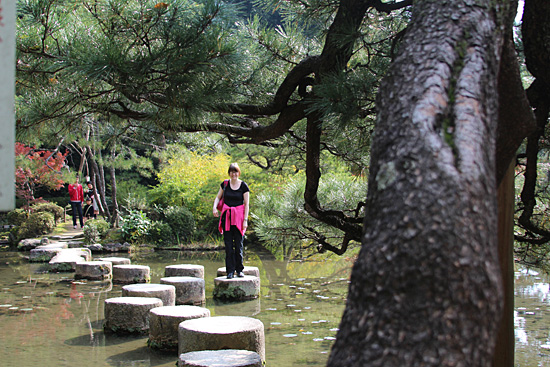 Who are you and what do you do?

In my working life I’m a school technician so I’m mainly involved with technology and science, but in my spare time I am the complete opposite, and spend most of my time on arty-crafty pursuits. I’ve been crafting for as long as I can remember, and my fascination with Japan inspires many of my craft projects and my home decor. I read a few years ago that to produce creative works you need to feed your creativity – visiting Japan and other fascinating countries is one of the things I do to feed mine. I set up my blog, emuse in 2007, and joined Flickr in 2008. I love sharing my crafty projects online, and hope that some of my ideas can provide inspiration to others.

How did you become interested in Japan, and how did your first trip there come about?

It’s hard to pinpoint exactly all the influences that led to my interest in Japan, but one of the main things was a documentary I saw when I was a teenager, called Man on the Rim. It was about the Pacific Rim countries, and one episode was about Japan. I was glued to the screen, watching the amazingly talented craftsmen making wooden combs and bamboo tea whisks, and admiring the simplicity and minimalism of Japanese design. I also was influenced by a tiny mirrored ornament that my gran had, which had two little kokeshi dolls on it, and by a photograph I saw in a magazine of a Japanese dollshouse (which inspired me to decorate both a dollshouse and my living room in Japanese style).

Years later, I was talking at work about Japan being my dream holiday destination, and one of my colleagues said, “You’re always talking about it, when are you going to do it?”. I took that as a challenge, and two days later I was down in the travel agents booking my first trip there!

Tell us a little about your trips to Japan

My first trip to Japan was in May 2006 on an escorted 7 day tour. It was also the first time that I’d ever flown! It was a small tour group, about 16 people, some couples, and some people on their own like myself, and everyone was really friendly. We started off in Tokyo, then went to Hakone and finally Kyoto. From the two days I spent in Kyoto I knew this was a city I wanted to explore further.

I timed my second trip, which was to Kyoto, to take place in November of last year, when the maple leaves would be at their most beautiful, and I also wanted to be there for the Shichi-Go-San festival to see children wearing their kimonos. Since this was my first truly solo trip, my other holidays having been escorted tours, I was a little nervous. But I really enjoyed the flexibility and freedom of travelling on my own, and it meant I could spend as much time as I wanted taking photos of all the beautiful shrines and temples.

I have some Japanese friends, who I met at a summer school at Edinburgh College of Art. They all live in the Kyoto/Osaka area, so it was great to spend some time with them, and it meant I didn’t feel completely on my own.

I loved exploring Kyoto and being able to visit all the places I’d missed the first time, like Kiyomizu Temple, Fushimi Inari Shrine, and Heian Shrine, spending lots of time in Gion, and lots of time shopping! The autumn leaves were spectacular, especially at Jojakkoji and Eikando temples, and the weather was really good. And I felt so healthy after eating nutritious meals and walking so much around the city!

How much Japanese do you speak, and have you had any problems communicating?

On my first trip to Japan, pretty much the only phrases I knew were those for “Yes”, “No”, “Thank you”, and “Where is the toilet?”, and I learned a couple more while I was there. Because it was an escorted tour, I didn’t find myself in a lot of situations where I needed to speak Japanese, and lots of the Japanese people spoke English anyway.

Before my second trip I used the website Memrise on a daily basis for about 8 months to learn some Japanese, but I’m still at a very basic level. I can read katakana (slowly), I’m getting there with hiragana too, but I know very few kanji. As far as vocabulary goes, I’m finding it easy to learn a lot of nouns, but I don’t know many verbs so I can’t construct many sentences yet!

The majority of people I came across in Japan would reply in English even if I spoke to them in Japanese, and even with those who don’t speak any English at all, it’s amazing how well you can communicate using just gestures and tone of voice. I’ve had whole “conversations” with many people where they’ve spoken Japanese and I’ve spoken English, and managed to understand each other! I intend to keep learning Japanese, and I now know more that 1000 words, but I don’t think I will ever be fluent.

Do you have plans to go back to Japan? What would be your dream itinerary if you did?

Yes, I definitely do want to go back to Japan. I would like to see some of the places I haven’t been yet, like Hiroshima and Miyajima, and maybe I will eventually get to Nara, which I’ve meant to go to both times I’ve been in Japan, but didn’t get round to either time! I’d quite like to see Lake Biwa as well, and to spend even more time exploring Kyoto.

If I could teleport you instantly to Japan for one hour, where would you want to be dropped off and what would you do?

I would love to spend an hour in Gion, Kyoto, at the time when the maikos and geikos are going out for the evening. Then I’d walk to Shijo Dori and eat some okonomiyaki! I also sometimes wish I could just transport myself from my everyday life to a quiet Japanese temple or shrine.

What 5 things would you recommend visitors to Japan should do/see?

I’m afraid these are all going to be Kyoto based, seeing as that’s where I’ve spent most time!
A. Nishiki Market – the smells, tastes, sights and sounds of this food market are amazing!
B. Fushimi Inari Shrine – the rows of torii gates are spectacular, and it is a fun walk to the top.
C. The flea markets at Toji Temple and Kitano Tenmangu shrine are great fun, with second-hand, new and hand-made items, food, fabric, and much more.
D. Gion – it’s wonderful to wander around here in the early evening when the maikos are dashing about to their appointments.
E. Toji-in temple – this is off the beaten track and a perfect place to go for a bit of solitude. 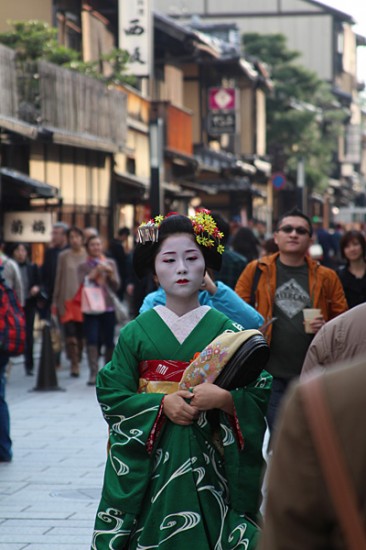 What did you bring back from Japan and what do you miss?

I went mad shopping in Japan, it is my shopping paradise! I bought loads of rubber stamps, many lovely fabrics, beautifully designed postcards, some cute Totoro items, some kanzashi, and a kimono, and I’m already making my shopping list for next time! I also took about 2000 photos, which I’m hoping will provide inspiration for lots of new artworks.

I miss the safety of being able to wander about in the evenings on my own – I wouldn’t do that in my home town! I also miss the sense of absolute calm and tranquility of walking into a quiet little shrine or temple off a busy street, getting away from the hustle and bustle.

I found the website www.japan-guide.com really useful when planning my trip to Kyoto. It’s got very helpful information on all the tourist attractions, like opening hours and prices. It’s handy to be able to find it all on one website, rather than having to look at the websites of the individual attractions, which are often in Japanese.

Its impossible to narrow it down to one favourite book, as my shelves are overflowing with Japan related books! My colleagues gave me a lovely book, Geisha, by John Gallagher, for my 40th birthday. It’s full of beautiful photos and has some clever transparent pages that show the layers of a geisha’s clothing. I also have a gorgeous (and enormous) vintage book of photos called Japan in Colour by Roloff Beny, which I bought for only £4. For fiction I love the Rei Shimura series by Sujata Massey, and I’m currently enjoying A Tale for the Time Being by Ruth Ozeki. Oh, and I must not forget the guidebook Exploring Kyoto: on foot in the ancient capital by Judith Clancy – I couldn’t have found my way around without it!

One of my favourite Japanese films (and one of my favourite films full stop) is After Life by the director Hirokazu Koreeda. It’s about a way station where the newly dead each decide on their most treasured memory, and make a movie of it, this being the only memory they will take into the afterlife. I love the beauty of the story, the melancholy feel of it, and the fact that some of it is filmed in a documentary-like style.

Anything else you want to add?

Thank you so much for inviting me to do this interview!

Thank you Emma! Look out for another interview in this series soon.

All photos by Emma Reid. 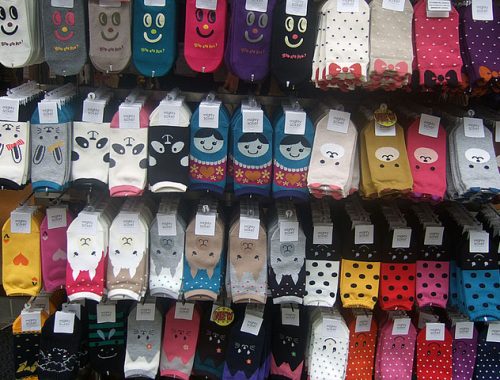 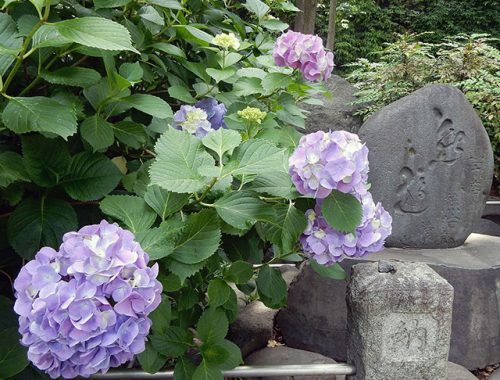