If you know me at all, you know I’m a lifelong space nerd. July is the the 50th Anniversary of Apollo 11 – and humans first landing on the Moon – so I am enjoying myself immensely. Here’s some of the ways I’ve been celebrating.

I have been thinking about how to kawaii-fy the lunar lander for a few weeks and finally managed to do a quick drawing on the actual anniversary day. I would have like to have more time on this but it was a nice reminder of my 100 Day Project last year. I’m a big fan of the LM – it looks like a rushed school project, which is my favourite type of space craft.

I read about this somewhere years ago and then forgot all about it, until we were walking along the seafront in Anstruther last month and I spotted Mars. I may have got over-excited and made everyone go for a walk to find the rest of the Solar System after dinner.

It’s a scale model so each sign is placed at a distance equal to the real thing, if you were the size of an atom! It’s so fun to see Earth, Mars & Venus all close together and then walk ages searching for the outer planets. To get to Neptune, you have to cross over some stepping stones that are only accessible at low tide – a nice nod to the difficulties of space travel. Pluto is included too but that was too far a walk as it was getting late. Here’s a guide.

I feel like I’ve only watched Apollo-related shows this month and it’s been awesome. There’s been some really good new releases and some reshowings of classics. The BBC iPlayer category in particular has a lot of great stuff from the archives plus a couple of new things that are well worth your time. There’s also some good stuff on Netflix especially the Mercury 13 documentary about the female pilots who tried to be astronauts. Here’s a list of my top 5 favourites – no prizes for guessing what’s number 1.

I also went to see Apollo 11 at the IMAX and I’m so glad I did as the massive screen and sound made it such a cool experience. The film is just real footage (including a lot of previously-unseen stuff) with some explanatory captions and animation – so no talking heads or narration. Instead you just get to watch the mission from beginning to end (heavily edited of course!). I can imagine it would be quite boring for your average person but I love all the details and that they let a lot of things play out in real time. The soundtrack was also incredible (see music below).

I have read so many books about space/Apollo and yet there are always more. Here’s my Goodreads space shelf, which has eleven 5 star books. They’re all so good but above are 3 non-fiction and 3 fiction that I can recommend you start with.

My friend Stu runs a sound project, Cities and Memory, and their latest project is Space is the Place. You can listen to sounds of space that have been remixed and reimagined by artists around the world. I haven’t spent much time with this yet but it’s such a cool idea.

As mentioned, the Apollo 11 movie soundtrack (Spotify) is so good that I bought it as soon as I got home. I’m a big fan of doomy electronic soundtrack music, especially because you can read or write with it on and not get distracted by words. It has such a similar vibe to the Pet Shop Boys’ Battleship Potemkin soundtrack (also excellent) that I keep getting that stuck in my head, despite not listening to it recently.

And for fun, here’s a few of my favourite space-related lists from the li.st days.

Hope this has given you some ideas! 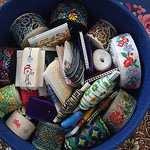 Catching up via the magic of photos