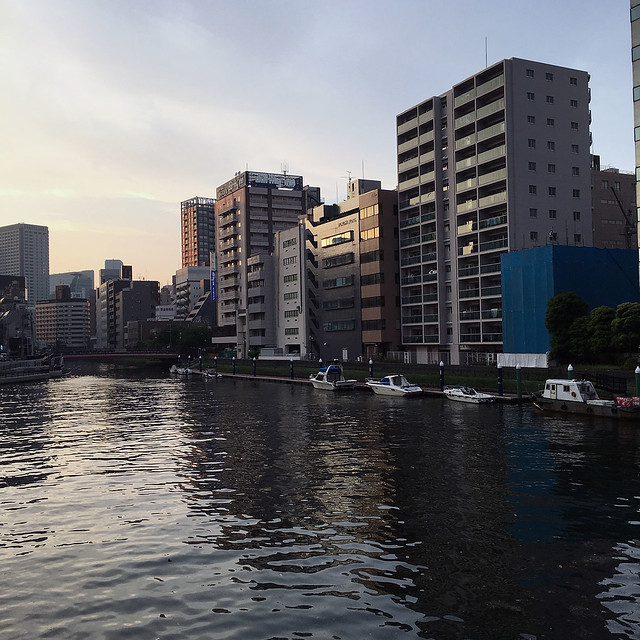 Since I was visiting Japan on my own and for three weeks, accommodation was going to be a big expense so I spent a lot of time shopping around. I eventually booked the Dormy Inn Tokyo-Hatchobori, an apart-hotel not far from Tokyo station and situated right on the river. To save me dragging my big suitcase around, I booked it for the whole 3 weeks, even though I’d be spending 6 days traveling around Japan on my Rail Pass. Annoyingly, because I booked my flight at the same time, I can’t tell you how much it cost, but it must have worked out at less than £50 a day. 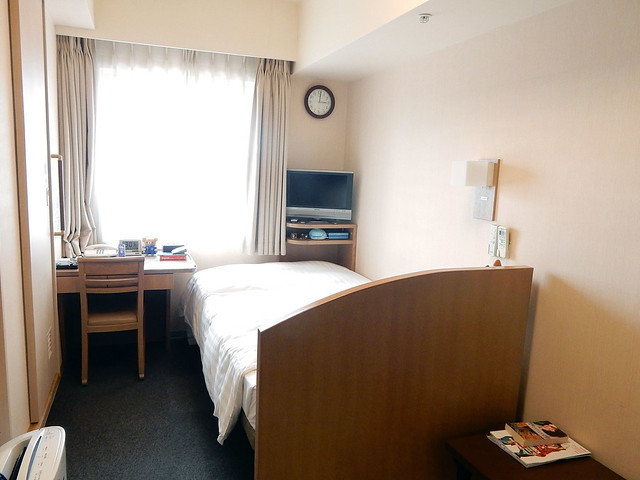 I wasn’t sure what to expect as the reviews were a little misleading in places but I was very happy with my stay. My room was small but with a queen size bed, desk, table, kitchenette, entryway and tiny bathroom with shower. There was also excellent aircon and a humidifier and the free wifi was pretty fast and available everywhere in the hotel. The hotel itself is a little bit old-fashioned (you still get an actual key) but everything was clean and the staff were all super nice. 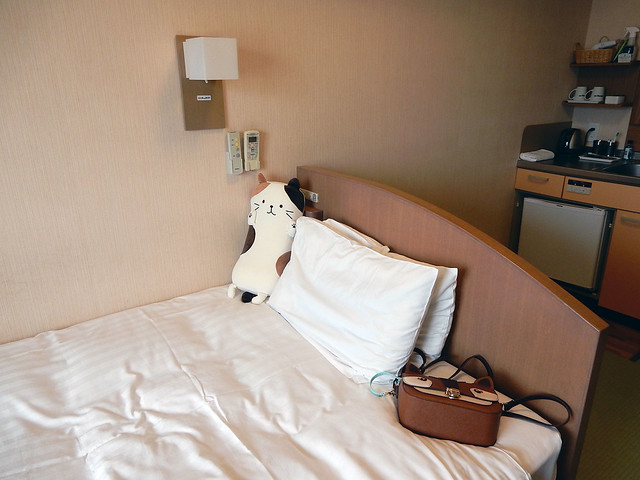 The bed wasn’t the most comfortable ever, but it was fine and I never had any trouble sleeping. A lot of reviews complained about the Japanese pillows, which have beans in them. I was sure this would be an issue for me but actually it was great and very supportive. I was still glad to have my cat pillow for lounging around though. 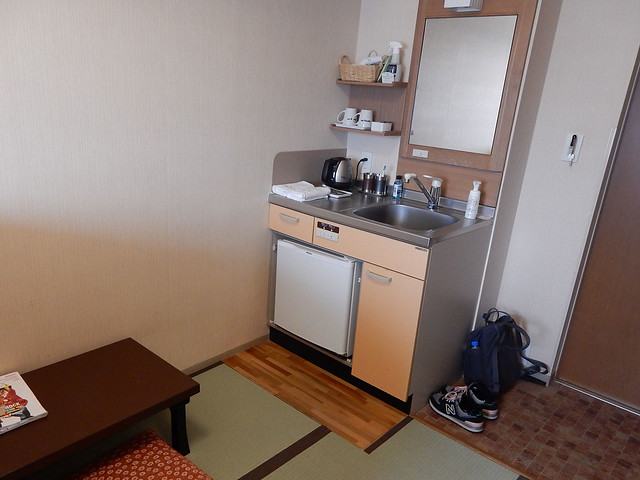 The kitchenette was a little disappointing as there was no microwave (there was one in reception, along with a free coffee machine) or any utensils or crockery. I should really have picked up a cheap bowl, plate, fork, spoon etc. at the beginning of my trip as it would have made meals a bit more civilised. There were lots of konbini around and the hotel breakfast looked pretty good, though I never tried it myself. They also serve up free ramen every night from 9pm which was very popular. I went once and it was pretty good. 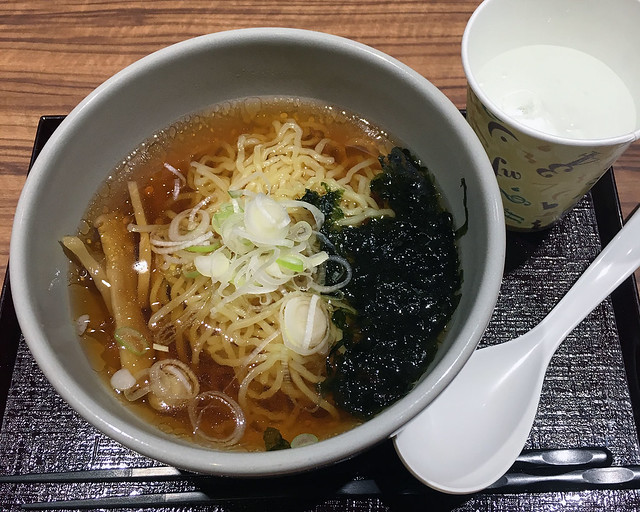 As well as the ramen, the most popular amenity was the onsen bath. You’ll be disappointed I didn’t use it but I’m completely blind without my glasses and would have had no idea what I was doing – at least at the swimming pool I can wear my prescription goggles and only look slightly crazy. The laundry corner is in the changing rooms so I did have a peek and it looked really nice with an area overlooking the river too. Here’s one of their photos. 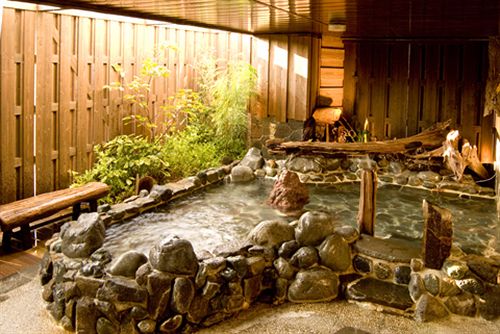 Hatchobori itself is a business district so there wasn’t a lot to do, or many restaurants, but the subway station was nearby (though it’s a lot of walking to the platform), which also had a JR line to the depths of Tokyo station (and to Disneyland in the other direction, if that’s your thing). I ended up using the free hotel shuttle service a lot as it drops off just outside Tokyo Station and runs regularly all morning. I am so sad that the shuttle bus hotel promo ad is not online – I had to watch it so many times and it was full of hilariously terrible acting.

In retrospect, I should probably have sucked it up and put my suitcase in storage while I was away and then moved to another location for the last week (Dormy Inn also have branches in Shibuya, Ikebukuro, Asakusa and more). I ended up eating a lot of konbini meals because I was too tired to travel somewhere else for dinner, and a change of scenery would have been nice too. Overall though, it was great and I would stay there again. You get almost as much space as a standard business twin room but all to yourself and for a much cheaper price. 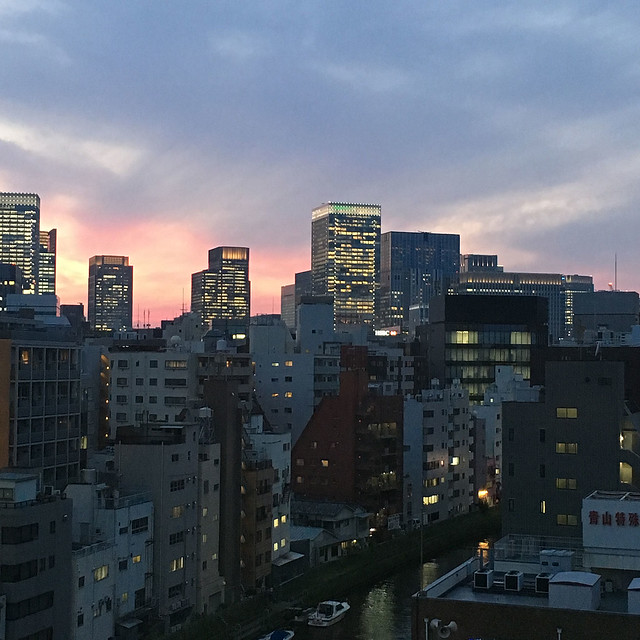 Hotels I stayed in outside Tokyo

Here’s a quick run-down of the other hotels I booked, which were all around £50 per night. In Hiroshima I stayed one night at Urbain Hiroshima Central. It was pretty basic but close to the main shopping street with trams to the station and Peace Park. It also included free breakfast but it was pretty grim.

I stayed 3 nights at the APA Villa Hotel Yodoyabashi in Osaka. This was a really nice hotel for the price and in an excellent location, with lots of cafes, restaurants, konbini and a supermarket. Yodoyabashi station is just a few stops from Shinsaibashi, Umeda and the Shinkansen. I would definitely go back.

In Nagoya, I stayed one night at Tokyo Dai-ichi Hotel Nishiki and the room was enormous! It’s in the Sakae shopping district so loads to do nearby, plus it’s easy to get to Nagoya station and other sights.

If you want to know more about any of these hotels, let me know. 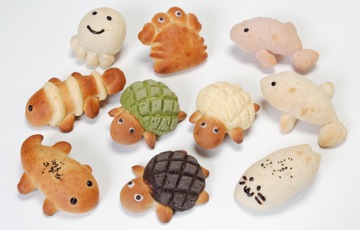