A Trip on the Waverley Paddle Steamer

If you follow me on Instagram – especially my side account – you’ll know I look out for the Waverley paddle steamer every summer. It’s the last sea-going paddle steamer in the world! It travels around the UK doing tours and in the summer it’s based in Glasgow with some trips stopping at my town, Helensburgh. 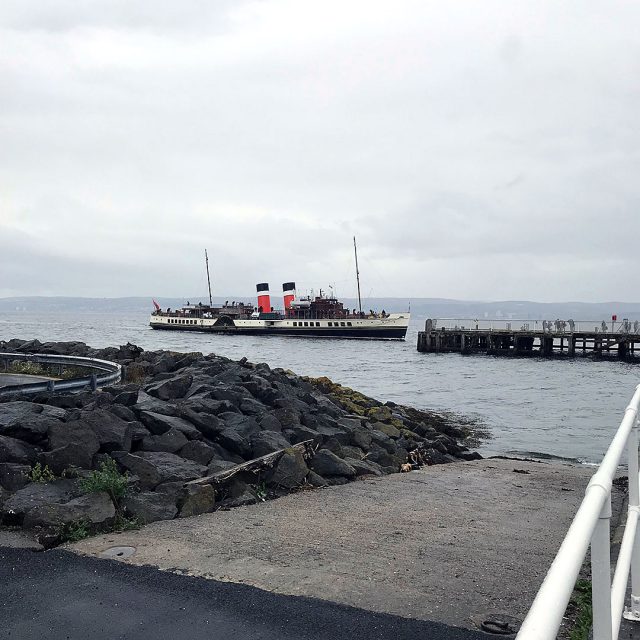 My dad has also been interested in going on it but we never managed to get the timing right. This year, we were finally in the same place at the right time, though sadly not with the best weather. It was so misty, we nearly didn’t see it arriving at the pier. 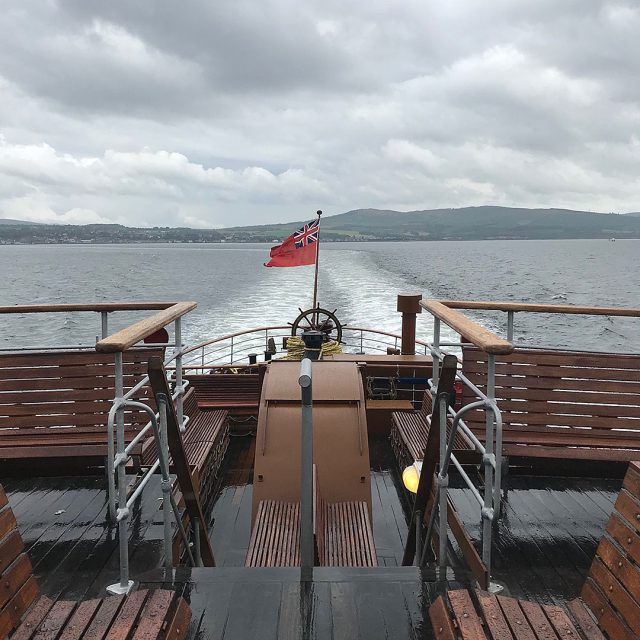 After so many years, it was a little bit strange to be on the boat looking back at the seafront and heading into the distance of my usual photos. It was raining but we toughed it out to get some photos. The rain made everything look very atmospheric. but I would really like to go back on a clear day and sit up top. 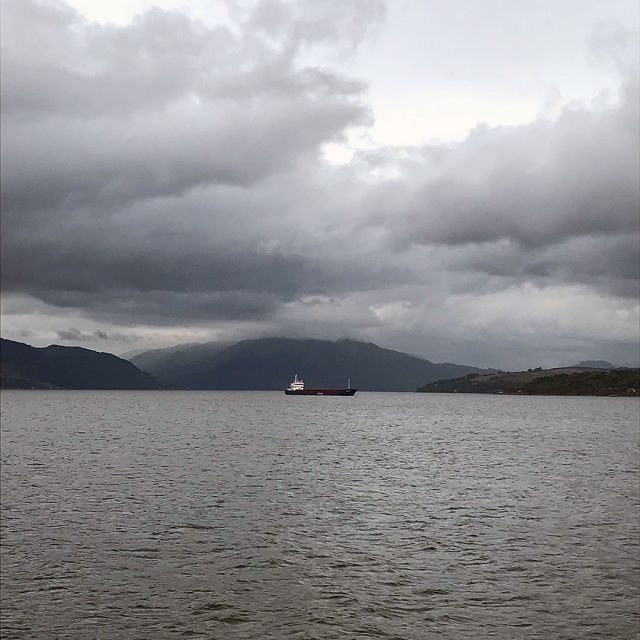 The trip we were on stopped at Dunoon, Rothesay and Tighnabruaich, before heading back by the same route (though the people who got off at Dunoon were told they might be stranded there if it was too windy on the way back!). 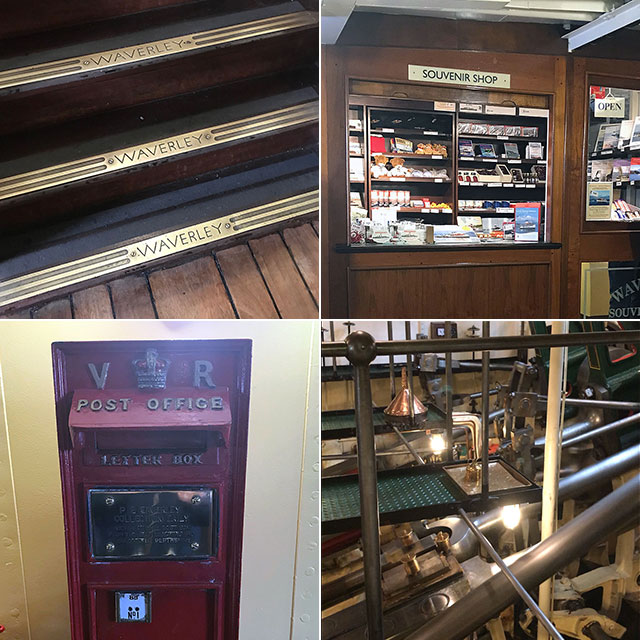 There was plenty time to explore on the way. The ship has a really interesting history and has been restored beautifully, so there’s lots of fun details to spot. You can watch the engines, buy some souvenirs, post something in the postbox (for a ‘posted on board’ postmark!) or get some refreshments at the bars, tearoom and restaurant. 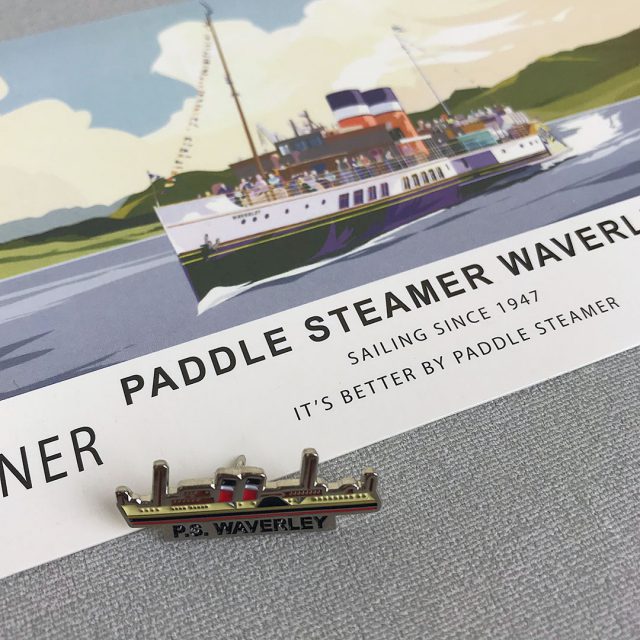 Of course I got some souvenirs, especially since they had enamel pins! I also sent a couple of postcards to family. The enamel pins are even available online, along with a tiny percentage of their very extensive line of souvenirs.

We got off at Rothesay on the Isle of Bute, where it was miraculously sunny (if also really windy). I’ve been to Bute before, where I first saw the Waverley and bought some great souvenirs.

We were there for three hours, which is a bit long for exploring Rothesay but too short to get out to the other attractions around the island. We mostly just had a wander and some lunch.

On the way back, the sea was really rough and it was pretty cold outside. Inside wasn’t much better though as the ship was rolling about and the bars and tearoom were full. There were a lot more people on board than I expected, though it’s probably quieter during the week.

We did manage to collect the people from Dunoon but they couldn’t land back at Helensburgh. They put us off across the water at Greenock, which meant another hour on a coach. (The photo above was taken through a crew-only door if you’re freaking out about the lack of barriers there!) 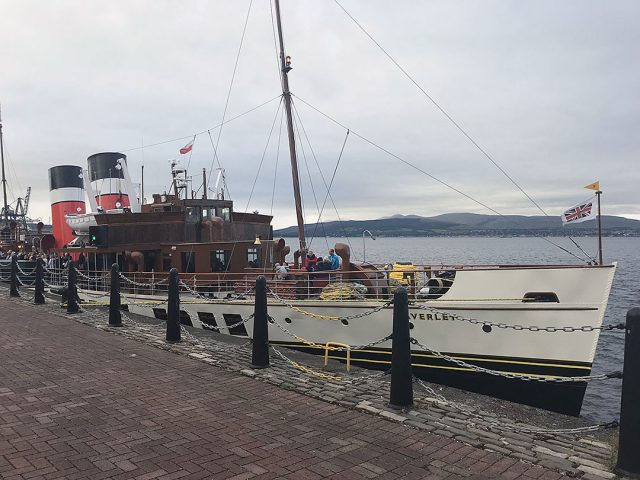 You can book your own trip on the Waverley paddle steamer online – it’s in Glasgow until the end of August and then it heads to the Bristol Channel, the South Coast of England and the Thames. I definitely recommend it for a fun day out! You can see more of my photos and videos over on Flickr. 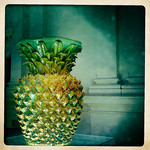 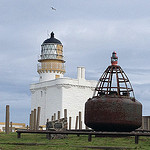 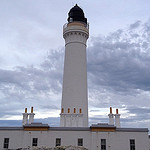