I’m getting close to the end of this series! Let’s see what I was blogging about every since 2008.

April 2008 is when I started drawing vintage buttons from my collection, which eventually became a fabric pattern, button bags and more. I also made my first 2-colour gocco print of a geisha, shared my souvenir stamps from Japan and wrote a guide to setting up shop online that brought me tons of visitors for years. I was amused to see the photos of my messy desk – I now keep my desk very tidy with little effort so it is possible to change!

April 2009 is a very quiet month but has one of my early career highlights – being a guest curator on Etsy with Claire as SCK’s Bunny & Panda (sadly the Etsy post is long gone). It seems I was mostly busy prototyping new handmade products, which included my Cakeify & Friends mini bags and more vintge buttons.

April 2010 is also pretty quiet but I designed my first 2 wrapping paper designs. I had kind of forgotten about the buttons one! I also drew a volcano in honour of the ash cloud travel havoc at the time and created some book heart kits.

April 2011 has me working on new pattern ideas for fabric including the original trapped ghosts (and many other Things in Jars), kokeshi dolls and ice cream bears. I was also outsourcing my badge making and wrote about our visit to the much-missed Hello Kitty’s Kawaii Paradise in Tokyo.

April 2012 is also a fabric designing month with some Look Around & Bunny patterns and mini size prints for doll clothes. I was very excited to see my characters on bedding at DENY Designs, though that was sadly not a great partnership in the end – at least you can find them at Society6 & Redbubble now instead. I also started my first tapestry kit and published the book issue of my Oddments zine. I wonder how many copies I printed as there is still 1 left, 7 years later!

April 2013 has me working on the next issue of my Oddments zine, funnily enough! I started my pick and mix badges offer and drew the first 5 A Day characters (hidden away in a post about recipes). I also wrote about my trip to York including the National Railway Museum (I really must go back).

April 2014 was my first full month in Helensburgh so I was sorting out my new studio and enjoying using all my indie designer towels! My 5 A Day characters appeared on new Shopping List notepads and stickers. I also blogged a lot about our recent trip to Brussels including the Atomium and Tintin Museum and went to the local Handiwives Show which was incredible.

April 2015 was mostly play and no work though I did add my patterns to one of my favourite on-demand products, pens! I also started My Art History, a series of posts about my early artwork, starting with primary school and high school. I celebrated my birthday with a trip up north for Easter and got incredible handmade gifts from my family – a Bunny apron, felt art portrait and window seat. We got ourselves stitched into a portrait for my mum too!

April 2016 was just before my 3 week Japan trip so I shared my 1 month planning list, published a new Planning For Japan guide book and bought a new camera. Other new products included Afternoon Tea gift wrap and fabric pencil cases. I also popped up North, which led to me designing a rug! I would still like to have that made in reality.

April 2017 was during my paper crafts year and I made a free tutorial for cute bumblebees including mini bees on sticks that inspired my wooden garden decorations. I had another Easter visit up north and made Angel Bunny brooches for me and my mum. I was still blogging about my 2016 Japan trip too with my amazing day out at Miyajima.

April 2018 was when I got the news that my book publication was being pushed back to 2019. It was for positive reasons but I’d been looking forward to it so much that it was a bit disappointing. I decided to take my mind off it but taking part in The 100 Day Project with 100 Days of Kawaii Characters. It definitely did fill my time and I completed it in August with so many new characters and patterns. I also added some new Kawaii Skies products with gift wrap and cloud brooches, had a fun birthday trip to Edinburgh and shared new photos of my studio.

If you’re reading this in the future, you can also check out all my posts for April 2019. 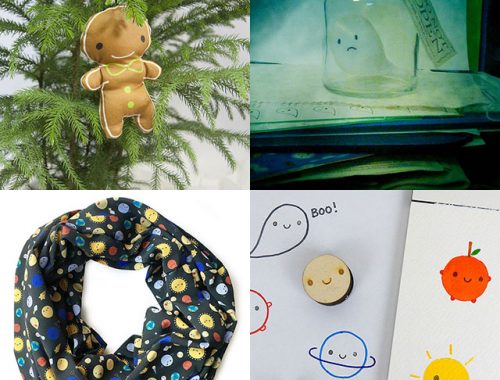 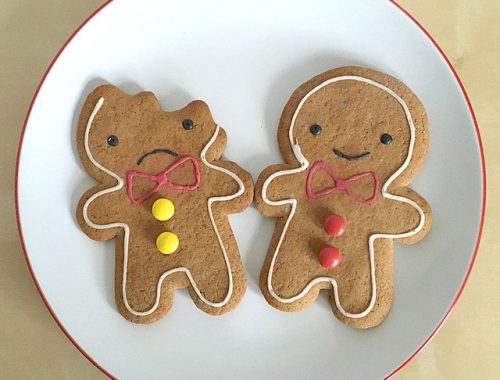